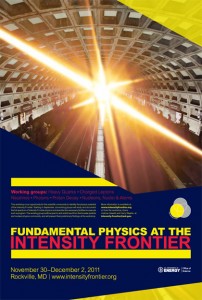 The DOE is sponsoring a workshop on physics at the intensity frontier starting at the end at the November and continuing into the beginning of December.  The web page can be found at http://www.intensityfrontier.org/.

Kate will be co-convening the Neutrino Working Group.

The most famous document in neutrino physics is the letter Wolfgang Pauli sent explaining the idea for the particle.  It begins “Dear Radioactive Ladies and Gentlemen,” and due to his embarrassment at proposing something that seemed crazy and probably not-observable he gives an excuse for not attending the meeting in person:

“Unfortunately, I cannot personally appear in Tübingen since I am indispensable here in Zürich because of a ball on the night from December 6 to 7.”

Symmetry Magazine had a nice picture and exposition of the original letter, explaining what various parts mean, and Kurt Riesselmann’s translation from that article is below.

As the bearer of these lines, to whom I graciously ask you to listen, will explain to you in more detail, because of the “wrong” statistics of the N- and Li-6 nuclei and the continuous beta spectrum, I have hit upon a desperate remedy to save the “exchange theorem” (1) of statistics and the law of conservation of energy. Namely, the possibility that in the nuclei there could exist electrically neutral particles, which I will call neutrons, that have spin 1/2 and obey the exclusion principle and that further differ from light quanta in that they do not travel with the velocity of light. The mass of the neutrons should be of the same order of magnitude as the electron mass and in any event not larger than 0.01 proton mass. – The continuous beta spectrum would then make sense with the assumption that in beta decay, in addition to the electron, a neutron is emitted such that the sum of the energies of neutron and electron is constant.

Now it is also a question of which forces act upon neutrons. For me, the most likely model for the neutron seems to be, for wave-mechanical reasons (the bearer of these lines knows more), that the neutron at rest is a magnetic dipole with a certain moment μ. The experiments seem to require that the ionizing effect of such a neutron can not be bigger than the one of a gamma-ray, and then μ is probably not allowed to be larger than e • (10-13cm).

Therefore one should seriously discuss every way of rescue. Thus, dear radioactive people, scrutinize and judge.

I admit that my remedy may seem almost improbable because one probably would have seen those neutrons, if they exist, for a long time. But nothing ventured, nothing gained, and the seriousness of the situation, due to the continuous structure of the beta spectrum, is illuminated by a remark of my honored predecessor, Mr Debye, who told me recently in Bruxelles: “Oh, It’s better not to think about this at all, like new taxes.” Therefore one should seriously discuss every way of rescue. Thus, dear radioactive people, scrutinize and judge. – Unfortunately, I cannot personally appear in Tübingen since I am indispensable here in Zürich because of a ball on the night from December 6 to 7. With my best regards to you, and also to Mr. Back, your humble servant

Nicolas Kaiser from the DAAD program is visiting the group for the next four months.

Roger is in Canada.  He is spending six weeks working on the HALO experiment. Underground in asia got boring so he is checking out the north american underground. 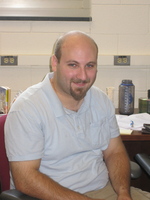 Alex Himmel officially joins the group as a postdoctoral researcher this month. He got his Ph.D. working on the MINOS experiment at Caltech.

Neutrinos, they are very small.
They have no charge and have no mass
And do not interact at all.
The earth is just a silly ball
To them, through which they simply pass,
Like dustmaids through a drafty hall
Or photons through a sheet of glass.
They snub the most exquisite gas,
Ignore the most substantial wall,
Cold-shoulder steel and sounding brass,
Insult the stallion in his stall,
And scorning barriers of class,
Infiltrate you and me! Like tall
And painless guillotines, they fall
Down through our heads into the grass.
At night, they enter at Nepal
And pierce the lover and his lass
From underneath the bed-you call
It wonderful; I call it crass.

After many years of work in T2K we are excited to report our first indications of electron neutrino appearance! 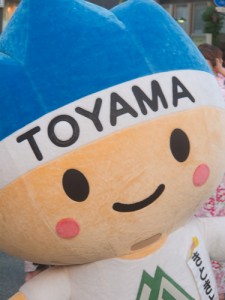